What is your level of English use?

February 12, 2022
Are you a never-ever or beginning English user? OR Are you bilingual or have almost no trace of any errors when speaking, reading, writing, and listening to English? If you are somewhere in-between these extremes, you are probably at one of the following levels. Which is your level of English ability do you think? BASIC USER (pre-intermediate+) A1 Breakthrough A2 Waystage INDEPENDENT USER (intermediate/upper-intermediate) B1 Threshold B2 Vantage (fluency and spontaneity in use) PROFICIENT USER (advanced) C1 Advanced C2 Mastery Take this assessment to find your level of English use. https://www.languagelevel.com/english/index.php Tell your instructor the result of this assessment.  Your level will help your instructor work with you to improve your English.   _____ Reference for the levels: https://en.wikipedia.org/wiki/English_as_a_second_or_foreign_language/
Post a Comment
Read more
Recent posts

March 30, 2022
Economics, etc. Different words, different uses economics, economical, economize, economy, economically Which is the noun, adjective, adverb, verb? Definitions But what's a noun? Economics and economy are nouns. Economic and economical are adjectives. Economically is an adverb. Economise (BE) is a verb. Or economize (AE) if you prefer. Examples Each word in context. A good shopper is economical. (She or he spends money carefully and doesn't pay too much.) Economize now or your budget with show you are in the red! He speaks economically. (He uses only a few words OR he is speaking about something from an economic point of view.) I studied macro-economics at university. Sara shops economically. (She saves money and spends carefully.) Solar energy for your home is expensive in the short term but it is more economical in the long term. The economic forecast for the Czech Republic next year is not good. The economy of the
Post a Comment
Read more

February 13, 2022
Past posts have been purged to make room for more current contributions. If you are looking for something that was here, contact me. Maybe I have a copy still somewhere.☺
Post a Comment
Read more

September 26, 2017
The sheriff is shot. But the music is great. [Précis. Language is embedded in culture also. Serious students of a language need to dig deeper to get it, or have the benefit of some help.] I have taught English as a foreign language for over twenty years. This has been both a secondary occupation and sometimes a first. In any event there are two teaching/learning opportunities I do not practice, which in fact weakens my effectiveness. I don't play games and I don't (often) listen to music. Thus, my efforts to help students learn are reduced, for both of these ways of learning a language are proven successful techniques. Recently I asked a student who is passionate about music about the song "Knockin' on Heaven's Door." He said, "Oh, we all know that. It is the first song I learned to play on the guitar." I then asked him what the song was about. He said he didn't know, but that it was something about being dead. I asked dead or dying. He d
Post a Comment
Read more

September 04, 2017
A note about this phrase. . . You can use it to describe work that women do. You can say this without it being negative or critical. You can also say this when your partner is the person doing all the cooking, cleaning, and childcare. Try it and see what happens. Chceš facku? It is possible she will look at you as if you are a caveman living in the distant past. Be careful, she can give you a good slap in the face.
Post a Comment
Read more
More posts 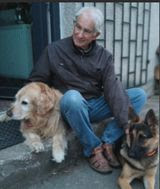 Not old. Not young.